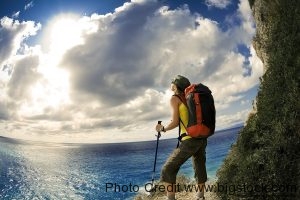 Coming out with a print magazine in today’s print-averse atmosphere may sound crazy … but Zoe Balaconis and her team at Misadventures have done it. Misadventures is an outdoor and adventure-focused magazine that’s by women, for women, and features lush photography, inspiring stories, gear reviews, and a tone that encourages you to get out there and kick butt. The magazine is hitting bookstores nationwide — including Barnes and Noble — for the first time with its summer issue in mid-July.

So what’s it like to found and manage your own online and print mag? Balaconis shares the deets:

How did Misadventures get started?

Balaconis: In 2013, I was subscribing to a lot of outdoors and adventure magazines, from Surfer to Outside to Afar, and I noticed there wasn’t a really good representation of women, either writing the stories or featured in the content or photographs.

I was chatting with my friend Marybeth, who also subscribed to a lot of these kinds of magazines, and she noticed that too. We decided to do some research to see if maybe we missed something — if there were magazines out there for women who liked the outdoors and adventures. There wasn’t.

So we decided to make one. Misadventures started online at the end of 2013; we wanted to see how it would go and if we were crazy, or if other people felt the same way. The support we received was overwhelming, both in terms of people who wanted to write for us and readers.

Do you work with Misadventures full time?

Balaconis: Not exactly, I do freelance writing and journalism, and I’m a teacher. Last year I taught writing at Boston University, and next year I’ll be teaching high school English. I’d say Misadventures takes up 60 percent of my time.

So what’s a typical day working on the magazine like for you?

Balaconis: It really varies. Lately we’ve been really cranking to put out the summer print issue.

On any given day I may be editing a piece and communicating with a writer to get something to its final form. I may be fact checking, reviewing credits, or working with the team on a marketing campaign down the line and how we’re going to get issues out the door. Or I might be talking with an advertiser to see if they’re happy with our work and want to continue to advertise with us.

You received a $25,000 grant (from the Venture Fund at Davidson College, Balaconis’ alma mater) in 2014 to use for Misadventures. How did you allocate the funds?

Balaconis: In a couple of different ways. First, we used it to get the word out. We thought at that point we had a pretty good idea, but we’d never be able to sell magazines if no one knew about us. So we spread the word in marketing campaigns, and invested more time in social media. Then we wanted to save the bulk of it for production of our first print issue, because we knew it’d be expensive.

You founded Misadventures because you were dissatisfied with the under representation of women in outdoors-industry magazines — have you yourself experienced any hurdles trying to make a mark in this male-dominated industry as a woman?

Balaconis: In terms of overt sexism, not really. Though we’ve been very well supported by women in the outdoor industry. They’ve experienced this, and they see the need for something like Misadventures, and they helped us find the way in the industry. The fact that so many women have been willing to help us is a testament to how difficult it can be; all these women have been our champions because they’ve experienced it themselves.

Although sometimes there can be a tone of condescension about trying to break into publishing, and I think it’s because we’re young, and we’re women. But those experiences are just more motivating.

You started out as a digital-only publication. Why did you decide to pursue print — especially with so many print publications folding or downsizing?

Balaconis: The whole team has wanted to make a print magazine all along — that’s where we noticed the original gap. In my head, that was always the end game.

All along, none of us thought print was dead or dying — though it’s obvious it’s in transition. But having worked in online publishing and journalism, I think a lot of what gets turned around in online publishing just isn’t the kind of quality you get in print, and quality is important to us.

You just scored distribution with Barnes and Noble nationwide. How did that come about?

Balaconis: It was pretty straightforward. We had our first issue come out in Winter 2015. It came out really great, and we were really proud of it. We thought the next step, besides building subscribers, was getting distribution.

So I just started cold calling people. We’d send distributors an issue with a nice letter explaining our mission. We got some answers back, then it became just a matter of where we wanted the magazines and how we could maintain our vision. It was surprising how fast it all turned around, but I think we have a pretty compelling story that spoke to them.

What’s one challenge you’ve experienced in founding and maintaining Misadventures that was unexpected?

Balaconis: Everything has been really unexpected! I’ve been surprised at how great the team as a whole has been able to push everything forward and make things happen. When we first started, it was just me and Marybeth tinkering around on the computer. Now we have a great team of writers, designers, and lawyers behind us. I’m always still surprised whenever I hear, “We’d love to help!”

I’m also surprised at how much I had to learn, about how a business works, from basic transactions to becoming a legal entity — there are so many details you don’t know.

Any advice to media mavens in the making on founding an online or print publication?

Balaconis: Go for it! There’s always more room for good writing and good ideas. Especially now. A lot of publications online have become similar in tone and voice; places like Buzzfeed have influenced the way other outlets sound and function. This is a time to shake things up. Now, making money doing that is difficult. But it’s definitely a challenge.